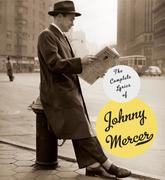 The seventh volume in Knopf’s critically acclaimed Complete Lyrics series, published in Johnny Mercer’s centennial year, contains the texts to more than 1,200 of his lyrics, several hundred of them published here for the first time.Johnny Mercer’s early songs became staples of the big band era and were regularly featured in the musicals of early Hollywood. With his collaborators, who included Richard A. Whiting, Harry Warren, Hoagy Carmichael, Jerome Kern, and Harold Arlen, he wrote the lyrics to some of the most famous standards, among them, “Too Marvelous for Words,” “Jeepers Creepers,” “Skylark,” “I’m Old-Fashioned,” and “That Old Black Magic.”During a career of more than four decades, Mercer was nominated for the Academy Award for Best Song an astonishing eighteen times, and won four: for his lyrics to “On the Atchison, Topeka, and the Santa Fe” (music by Warren), “In the Cool, Cool, Cool of the Evening” (music by Carmichael), and “Moon River” and “Days of Wine and Roses” (music for both by Henry Mancini).You’ve probably fallen in love with more than a few of Mercer’s songs–his words have never gone out of fashion–and with this superb collection, it’s easy to see that his lyrics elevated popular song into art.From the Hardcover edition.